Chic and romantic, classic and eclectic, the Czech Republic is epic!

The Czech Republic is known as a top tourist destination: sublime photos of the capital, Prague in the golden mist, the vineyards in the sunset still throne over and over again in the windows of travel agencies. Exaggerated? No, the Czech Republic is one of Europe’s most beautiful treasures.

Prague is chiseled like a jewel and glows like a precious stone. This city is a gem, it’s hard to describe it any other way

It is called little Paris or the city of 100 steeples. It is the first impression that dominates as soon as you get a little higher: chiselled roofs and bell towers, elaborate buildings and sophisticated architecture rise up over the whole city. There is so much to see in Prague that it’s hard to visit it on a hurry.

The architecture here is as extensive as a dictionary. The accompanying history, as dense as an encyclopaedia

Because Prague is a bit like Venice, every alleyway, entrance or building catches the visitor’s eye: a bas-relief, an inscription, an unexpected architecture.

Prague does not only seduce with its architectural treasures

These buildings house museums, underground bars, galleries. It could also be described as a city of sidewalks crowded with merry night owls.
Because Prague is not immobile, draped in its pride, frozen in its incredible heritage. Prague is alive and dynamic.
Apart from the fabulous churches and castles, this city is very endearing. In the evening, visitors and locals alike gather in groups sitting on the ground in the large square in the old town. They meet and chat while admiring the magnificent buildings in the light of the setting sun. Show, dance, music, brass band follow one another, it is impossible to get bored.
Prague is beautiful day and night, in the cold or in the heat. The city is as attractive in winter as in summer. When it is cold, the pubs and cafés are full of life, music and laughter. In summer, the terraces and grassy banks are bustling with people.

Prague is as beautiful as it is touristic

The Czech city is a popular destination. The city is as popular as Paris, although its center is 10 times smaller. Prague is a victim of its success. The people of Prague deplore it, they have the feeling that “their city has been stolen”. And this is understandable. The old town is literally invaded by groups of tourists following the flag of their guide. This uninterrupted, dense and noisy traffic can make the atmosphere of the city heavy.
But for those who like peace and quiet, you have to escape in the less frequented areas. Wherever people sit in the grass, facing the Vltava, enjoying a refreshing Közel or Staropramen. It will come as no surprise to find groups of young people with flags debating politics and, who knows, shaking hands with a future presidential candidate.
You only have to explore a little further to find restaurants, typical cafés where you will have the chance to meet more Czechs than tourists.

Mucha, father of art nouveau is an emblematic personality who is worth no less than 2 museums to visit absolutely. Kafka, of course, but there are other personalities to (re)discover. It’s the ideal moment to plunge into the unbearable lightness of Kundera’s being (or to see the film which is as good as the book).

The Czech Republic has seen the birth and growth of great authors, poets, playwrights and intellectuals who often had to deal with the Nazis and later the Russians. These great intellectuals crossed the desert before finally being published years later and recognized for their true worth. Not all of them had the opportunity, like the very talented Milan Kundera, to emigrate to France. Many of them fell into oblivion. Rediscover the works or history of Ivan Klíma, Karel Čapek or Vaklav Havel, brilliant authors and political actors.

Milos Forman is a golden boy of the city. He was living in Prague and until the arrival of the Russians when he took his first steps in the cinema.
Don’t you exclaim “Forman? The American cinema director!”. Even if he was stripped of his citizenship, add “Czech origin“, it’s nice to hear.
We’re talking a little less about Ivana Zelníčková, the current Miss Trump.

The Czech Republic is known for its Prague Spring and the invasion of Russian tanks in the middle of the city to put an end to it. The country is also marked by World War II. Czechoslovakia was the first country to be invaded by the Nazis, (March 15, 1939) before Poland (September 1, 1939), although it was this annexation that marked the beginning of World War II.

If you are lucky enough to visit Prague with a Czech friend, he will surely take you to the Church of St. Cyril and Methodius. This is not a church like any other. This building is a strong symbol of the Czech resistance during the Second World War. On May 27, 1942 at 10:30 am, a commando of 7 elite paratroopers murdered Heydrich, a Nazi officer, sadly known as the Butcher of Prague.

The attack, a real amazing feat, is a success. But the story does not end there. Betrayed, hunted, the members will be supported by the population despite the daily execution of civilians “until Heydrich’s assassin is arrested“. Chased, the paratroopers take refuge in the church. Assaulted by 700 German soldiers, the commando will resist to the end. The Nazi forces won’t take any man alive. The four survivors of the assault will kill each other in the crypt.
Operation Anthropoid, though successful, will result in terrible reprisals from the occupiers. One of the worst massacres of the war will take place in Lidice. This atrocity will deal a severe blow to the Czech resistance.
Bullet holes are still visible around the crypt of the church… They will remain there for a long time.

The country cannot be reduced to its flamboyant capital. Bohemian villages, wine routes and fabulous nature parks are worth exploring.
The Czech countryside is green, quiet, harmonious. The small roads crossing the fields and plains are planted with countless wild apple trees with tortured branches. The colours, the gentle and high relief of the road, a stone bridge, a wooden barn, haystacks, these are very beautiful landscapes.
It’s a real chance to get lost in this country, to meet the villages, the pretty low houses surrounded by orchards and vegetable gardens, the small squares where the villagers meet at the end of the day is a pretty nice trip.

The Czech Republic counts in its treasures cities straight out of a fairy tale book such as Český Krumlov, Karlštejn Castle or Konopiště.

The Czech Republic is a land of adventure and nature

The Czech Republic has national parks that will delight hikers. Vertiginous gorges, forests and rocky outcrops such as the popular Hruboskalsko near the village of Český ráj.
The Mikulov region in South Moravia, in addition to delighting wine lovers, opens its paths to cyclists and walkers for an exploration of the enchanting country.

And the Czechs, are they welcoming?

Czechs have a very strong sense of hospitality and welcoming someone into your home is not something you do lightly.

They are a people for whom friendship is not an empty value, which is also why making friends here is not something you can do in five minutes.

They are warm, smiling and considerate. To really meet them, you have to get out of the tourist tornado, like everywhere else.
Czechs of all ages will then reveal themselves with extraordinary kindness. The most touching thing? The gallantry of men towards women and good manners in general.

Czechs are very protective of their cultural identity. They are proud, solid in a culture that has eluded them more than once in history. It can be quite ticklish on political issues or on Europe. Beware of heated debates, you might upset more than one. You are a traveller, not a lecturer. Their culture, their history, their traditions are precious, make sure you respect them. 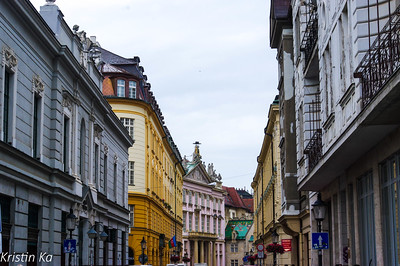 Bratislava the medieval and a beautiful nature hike, what do you think about Slovakia?

Slovakia is beautiful. Today, it has become a trip of choice since the country turns to reasoned, reasonable tourism which favors quality over quantity. Another reason, if needed to go there!