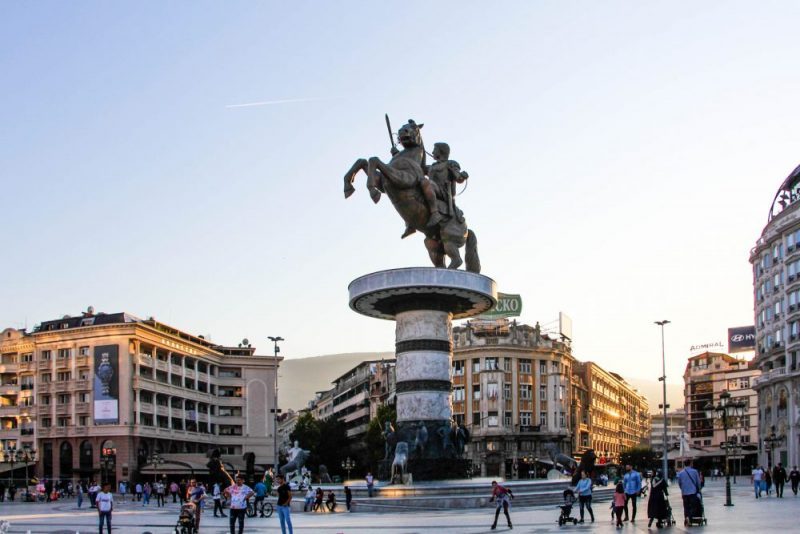 Don't forget "North", Northern Macedonia. It is a small country in the Balkans in former Yugoslavia. A crazy, funny country that will surprise more than one traveller

Northern Macedonia, this is not easy to understand at first sight

NORTHERN Macedonia is independent since 1991 and was originally to be called the Republic of Macedonia. But no, things became more complicated. The Greek government did not accept that the small republic should be called so.
And why not? Because for some Hellenics, Macedonia is Greek by the shoes of Mercury* ! Greek!  Like salad, retsina or souvlakis. Under the iron rule of the European Union, the young republic was therefore forced to add “of the North” to its illustrious name so as not to be accused of cultural plundering and identity theft.

Northern Macedonia: a long search for a controversial identity

This story is true. But that’s not all!
Northern Macedonia claims to be Alexander’s homeland. And not just any Alexander: the Great, the Conqueror, son of Philip and Olympia. Greece does not agree. What the hell!
For Greece, Alexander was certainly Macedonian, ok, but on the Greek side by Jupiter’s beard* !
The small northern Macedonia does not let itself be misled by his neighbouring scholar and does not stop planting imposing statues and monuments in honour of the hero.
But Greece has its temperament. It is still the cradle of the greatest heroes that the earth created by Hercules*!
Brussels therefore calls on Northern Macedonia to soothe its enthusiasm and will have to rename “Alexander Square” by adding “The place of the man on a horse” !
It’s the same for the flag, the small state was forced to exchange its Virgina Sun for another, more stylized one, which does not remind us of the ancient Greek symbol, by the schell of Venus!
When you visit Northern Macedonia, you must keep your sense of humour and mockery, right?

What language is spoken in Northern Macedonia?

Good, very good question. Officially Macedonian is spoken there But in Northern Macedonia nothing is obvious. They also speak Albanian, at 25%!
The alphabet is Cyrillic. It’s neither Russian nor Greek. Be careful not to make a mistake or you’ll go to hell or by the Greeks.

Are the descendants of Alek-man-on-horse nice?

Yes, they are. Affable, warm, smiling… The Macedonians from the north are worth meeting. Outside the shopping and tourist streets of Skopje, the encounters will be characterised by friendliness and simplicity. The Macedonians from the north are generous. It is not unusual to be offered a tea, an apple, a piece of boerek (to try) to get to know each other.

What is there to see in Northern Macedonia ? Beautiful old monuments, monasteries, lakes, ruins, hammams…

Skopje is worth a city walk: the city is a true open-air museum: the museum of kitsch!
The statues are swarming, it’s a real epidemic! They are not old and most monuments are modern, but what an abundance!
This explosion may seem fake, artificial and loud to the traveller used to old stones. The whole thing is sometimes indigestible: modern, somewhat pompous buildings bordering on a few monument in Soviet style and brand new neoclassical ones.
But Skopje, under its ancient Las Vegas aura, also hides quite typical markets, winding cobbled streets with very old and tired architecture full of charm.
It is worth remembering that Skopje was hit by a strong earthquake in 1963, which destroyed most of the construction.
Macedonia is a small country, but that does not mean that the visit should be rushed. The nature-loving traveller will find beautiful nature outside the capital, where he can wear out the soles of his shoes.

Here the mixture dominates. Although Northern Macedonia is predominantly Christian Orthodox (64.7% of the population), it also consists of Muslims (more than 33%). It is quite normal to hear the thundering call of the muezzin and the ringing of the bells simultaneously. The culture is a real cocktail, which sometimes threatens to become Molotov.
This country is a great mixture: from the dress code (strict Islamic dress-veil and short dress with high heels) to gastronomy and architecture, Macedonians have several different roots, and everyone carries their cultural heritage and identity with pride.
According to the inhabitants, the city is divided into two parts: a Muslim side (Turks, Roma, Albanians) and a Christian side, which is inhabited by Macedonians.
For the traveller, these divisions are not immediately obvious.
Macedonians from all sides are hospitable and kind to visitors. Let us hope that the country will find its balance, identity and real stability.
Sometimes it is good to stay on the surface while travelling!

What do you eat in Northern Macedonia besides Greek salad?

We find in this country the dishes that are dear to the Slavic, Turkish and Persian countries: the cucumber and tomato salad šopska (shopska in Bulgaria), grilled meat very close to koftas. The Macedonians serve a very solid Tavče gravče. It is a preparation based on beans, peppers and onions, generously sprinkled with olive oil, prepared, cooked and served in a small ceramic bowl.
The börek, halva and baklavas, real high calorie atomic bombs, are also very good.

*Humor.
*Yes, I know, Jupiter, Hercules, Mercury and Venus are the Roman names for these illustrious Greeks … And, I love Greece.

Greece: ultramarine blue waters, white houses and bouzouki notes. Okay, it’ exactly like this, but what if we were going to take a closer look?

No need to try to scratch the varnish, Greece, it rhymes with highniss, drunkenniss and goddiss. Greece deserves all the good that is said of it, even off the beaten track.