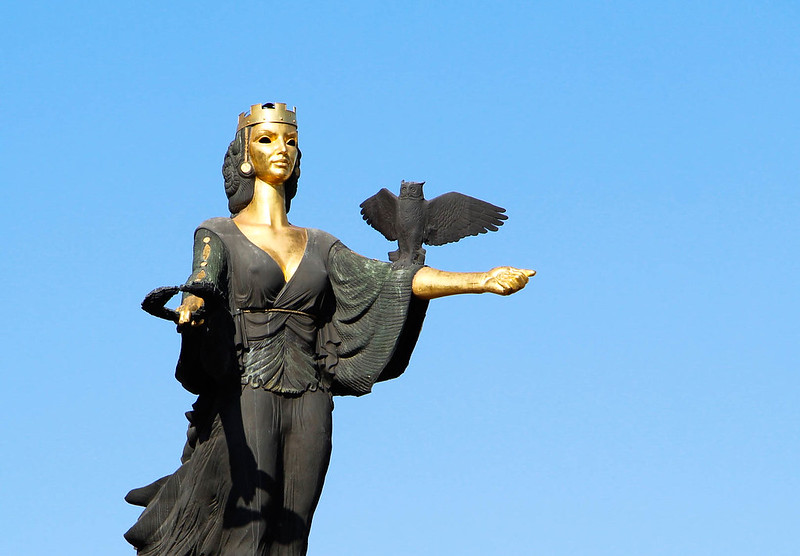 The most famous thing in Bulgaria... is yoghurt! Pack your luggage, it's time to discover this fabulous country full of plains, beautiful cities, magical forests and golden beaches

Bulgaria has officially existed for ages. This country has seen many twists and turns over the centuries. Persian, Turkish, Greek and Eastern influences have changed the face of the cities and traditions, they are found all along the way.
Travelling in Bulgaria is more than just travelling, it is a country that touches deeply. Is it due to the kindness of the Bulgarians, the beauty of the ancient buildings hidden in bewitching forests, the welcoming villages?
There is no doubt about it, this country knows how to be loved for something other than the softness of kisselo mliako, the Bulgarian yoghurt.
To visit Bulgaria is to plunge into history, culture and occasionally into the waters of the Black Sea. On this side, the beaches are pretty nice.
Bulgaria is exciting. This country arouses a particular emotion, the one that fills the travellers and which is not always so easy to find: a certain sweetness of life, a true spontaneity.
It is not only in Bulgaria where the inhabitants are kind and friendly (fortunately) but in Bulgaria, their sincerity is just overwhelming.

Bulgaria is beautiful and moreover, it is very accessible, easy to make a nice trip there

The dominant impression (wow, that’s amaziiiing!) does not let go of the traveller from the beginning to the end of his visit. Bulgaria has surprising cities of elegance, modernity, light. The villages have kept their character trough old houses, alleys and fountains, communities that gather in the square at the end of the day preserves its art of living,  traditional clothes and culture.

There are countries that are not easy to fall in love with at first sight, you have to deserve them. The language or the transport are difficult, the locals cold or distant, the attractions few. In these countries, you have to be persistent to find the beauty, the warmth hidden under the surface. Bulgaria does not belong to this group. In Bulgaria, everything is easy. The people are warm, welcoming and make a commendable effort to communicate with travellers.

What language is spoken in Bulgaria?

Beware of mistakes, in Bulgaria they speak Bulgarian, not Russian. The alphabet is not Russian either, it is Cyrillic. Inhabitants can be touchy on the subject. The “inventors” of this alphabet, the brothers Cyril and Methodius, who have since become saints, introduced it to the country a long time ago. The Cyrillic alphabet was developed from the Greek alphabet, which had been used in Bulgaria until then, and the Glacolithic alphabet (and others too, but not everyone agrees).

There are a good number of languages that use Cyrillic: Bulgarian, Kazakh, Kyrgyz, Macedonian, Mongolian, Russian, Serbian (but half with Latin anyway), Chechen, Belarusian, Ukrainian, Uzbek… and a few dialects from non-Slavic countries. In all, 200 million people are concerned.
The expressions are sometimes identical or very close to Russian. The natives won’t lynch you for it, but make the effort to speak Bulgarian, it will please them.
So don’t say Privet or Do svidaniya but rather Zdraveĭ and dovizhdane, do-vij-da-ni-yé. 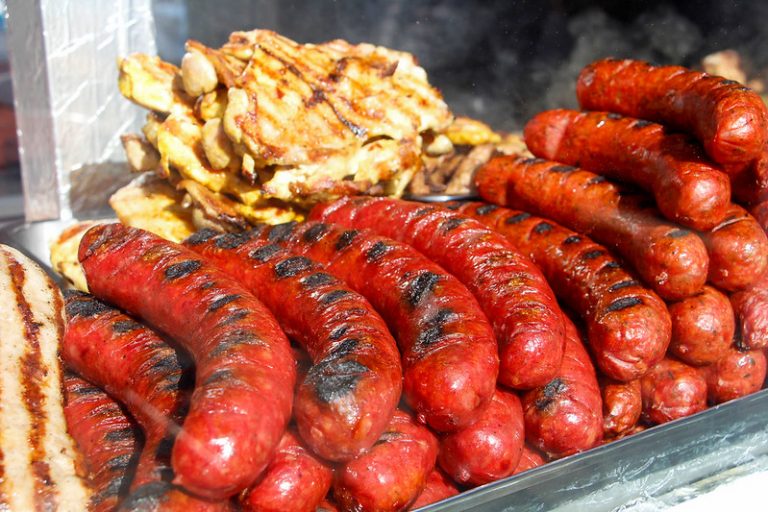 Rustic, simple and not always dietetic, Bulgarian cuisine is not for the faint of heart

It’s a joyful mix of influences: Middle Eastern, Persian, Turkish, Greek, Russian… and a touch of Europe. The aperitif here is as traditional as in France. You can enjoy a glass of rakya ( also called rakija, rakia, raki, rachiu from the neighbours), a vegetable salad, Chopska (tomato-cucumber-onion), cooked peppers, feta cheese and of course, a yoghurt sauce. With a bit of luck, the aperitif will also include a plate of very honorable cold cuts. This is a tradition dear to Bulgarians, so don’t bring your packet of potato chips.
Another curiosity, the tarator. This astonishing cold yoghurt soup is sometimes so liquid that it can be considered as a drink. It contains finely chopped cucumber, dill, garlic and sometimes nuts. Refreshing and light, it is a real delight.

Bulgaria consumes a lot of cheese but the production is not very diversified. It is mainly fresh cheeses, the sirene, whose texture varies from compact and crumbly feta to cream. But there is also Kashkaval. Famous throughout the Balkans, this mature yellow cheese has a semi-hard paste and a fairly mild taste. It is highly appreciated, and can even be found in its most astonishing form: breaded.

Half cake, half delicacy, sweet or savoury, it comes in many forms. It is a filo pastry with filling, rolled in a spiral shape and baked in the oven. The Bulgarian Banitsa looks a lot like the Turkish börek but here it is really typical. It is also eaten on New Year’s Day with wishes or a bean hidden inside to bring good luck and good fortune throughout the year. It’s really good… but it’s terribly fatty.

In Bulgaria, what do you find in the drinks section?

The rakya, brandy made from fermented fruits such as plum, apricot, pear but also apple, quince, peach, etc. It is the national drink! Beware, it is tasted more as an aperitif than as a digestive. Rakya is very popular, families are even allowed to produce their own vintage (30l per year).

The wine-growing tradition dates back more than 3000 years. Bulgarians will tell you that Dionysus was (perhaps born) here… but not all historians agree. It doesn’t matter, Bulgarian wine is heavy. There is written evidence: Homer mentions it in the Iliad. It’s really good and is worthy of Italian or French vintages: Bulgarian wine is not a vulgar piquette. 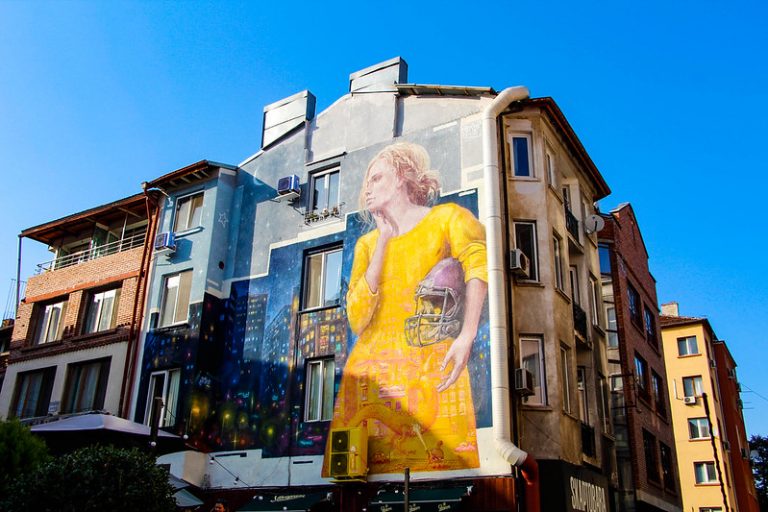 The cities of Bulgaria are pleasant. Despite war tragedies, crises, successive governments have failed to make them ugly. It is surprising how dynamically the Bulgarians are tackling the problem of renovating old buildings. The country does not yet have the economy to resurrect its heritage. The simplest and cheapest way to protect (and sometimes enhance) it is to call on street art artists! Neither one nor two, the walls of Plovdiv and Sofia, are now so well decorated that it is absolutely necessary to follow the Free Walking tours dedicated to Street Art.

In Bulgaria, the most beautiful of trips is done without a map or itinerary

For a real exploration of Bulgaria, you should not hesitate to rent a car and take your time

The Bulgarian forest is omnipresent. Crossing the country through its woods is an enchanting journey. It’s beautiful, krasiva!

It is in these campaigns, forests and villages that the Bulgarian soul is found. The inhabitants are really kind, hospitable and so joyful! This trip is likely to enchant the most jaded of nomads.

You don’t have to organize anything, you just have to get lost. Take side roads, get off beaten track, tourist attractions. Chance will not fail to sow nice encounters along the way. A truck loaded with workers delighted to discover you at the end of a muddy bend, lost in the woods (dobre dosh! dobre dosh! Welcome!). Lonely shepherds, curious and smiling, villagers happy and surprised to see you pass by. They will not hesitate to search for the village chief to welcome you.

Nice Bulgarians, isn’t that your cup of tea?

Macedonia is not a Greek salad! It is also a country worth seeing!

Shaken in the not always rollercoaster of history, North Macedonia is an endearing and crazy country which does not give up anything to appear on the menu of the traveler.